GOP Candidate Ron Paul has produced a detailed budget containing over $1 trillion in first-year reductions. Mitt Romney, Rick Santorum, and Newt Gingrich have only indicated that they would attempt to repeal Obamacare saving an average of $20 billion a year.

Why Do the Candidates’ Budget Plans Matter?

The only way that a president can noticeably affect the everyday lives of all Americans is by raising or lowing their standard of living.  This is accomplished through their influence over the real tax rate.  The real tax rate encompasses all normal forms of taxation, but it also includes a hidden tax known as inflation.

All of the Republican candidates have detailed plans for modifying the tax code.  But saying you’re going to cut taxes without cutting spending correspondingly is sneaky. If you cut taxes, but maintain the same level of spending, then you have to either borrow or print the resulting budget shortfall.  Borrowing the money is worse than paying with taxes immediately, not only because we’ll have to pay it back in a future when the government’s fiscal situation is predicted to be far worse than is today, but we’ll also have to pay a bunch of interest on top of that.

The alternative to borrowing is to have the Federal Reserve fire up the printing press.  The FED creates trillions of new dollars out of thin air and give it to the government through the purchase of treasury bonds.  The effect of this is identical to the effect of criminal counterfeiting.  If one doubles the money supply without a corresponding increase in GDP, the long-term result is that everyone’s paycheck can only buy half as much.

So using the magical money machine to pay the bills just shifts the tax burden to an inflation tax.  According to the Consumer Price Index, inflation is only about 3.5%. However, the real rate of inflation is currently almost 10%. The inflation tax, while largely ignored, hurts middle-class and low-income Americans the most.  This is because inflation is flat tax which doesn’t tax the poor at a lower rate the way our progressive income tax system does. In fact, it’s somewhat regressive because the loss in value is delayed.  When the new money is initially created, price inflation hasn’t set in yet.  The first people who get to spend the new money are generally giant financial institutions.  By the time it filters down the average Joe, it’s already lost a lot of it’s value.

So the only way a president can change the real tax rate is by increasing or decreasing government spending.  Therefor, the only thing about a candidate that’s guaranteed to significantly impact your life is not whether they think gay people should have the right to suffer through the institution of marriage. It’s not whether or not their religion’s doctrine includes magic underwear.  It’s not even their tax plan. It is only the candidates’ positions on spending that is guaranteed to directly affect your everyday life by increasing or decreasing your standard of living.

But does a president really have any control over spending?

After all, isn’t the level of spending set by the congress?  This is generally true, but the president does have a number of very powerful means of controlling the budget:

We know that President Obama stands shoulder to shoulder with our nation’s drunken sailors on spending, but what about the potential Republican nominees?

Romney wants to repeal Obamacare (which is very similar to Romneycare aside from the fact that Romneycare covered abortions).  As stated before, this would save $20 billion a year.

Other than that, this is the maximum level of specificity from his programmers:

“Mitt Romney will bring fiscal restraint to Washington by placing a hard cap on federal spending to force our government to live within its means and put an end to deficit spending.

Mitt will also curb federal spending by repealing Obamacare, the federal takeover of health care that is scheduled to cost taxpayers one trillion dollars over the next ten years. He will also focus on eliminating wasteful government spending and right-sizing the federal government to save taxpayer dollars. 00010101.”

The Romney Record on Spending

If we’ve learned anything from the vast disparity between George W. Bush’s fiscal rhetoric and fiscal record, it’s that Romney’s gubernatorial record might be a better indicator of what we could expect from a Romney federal budget. Under Mr. Romney, state spending went from $22.3 billion to $28.1 billion, an annual increase of 6.5 percent.  This is twice as much as the average 2.9% average statewide budget increase.

So, if his record is any indication, we shouldn’t expect too much from a Romney presidency in the way of cutting the federal budget. 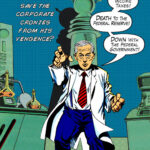 From his complete detailed and itemized budget:

Makes a 10% reduction in the federal workforce, slashes Congressional pay and perks, and curbs excessive federal travel. To stand with the American People, President Paul will take a salary of $39,336, approximately equal to the median personal income of the American worker.”

The Paul Record on Spending

Paul’s congressional record consists of a long list of votes against federal spending.

Note: I tried to write this objectively, so I seriously put a lot of effort into finding any votes by Ron Paul for significant spending increases.  I hoped to find some to add an appearance of increased credibility to the piece but was  unsuccessful.  If you have any examples, please leave them in comments at the bottom. 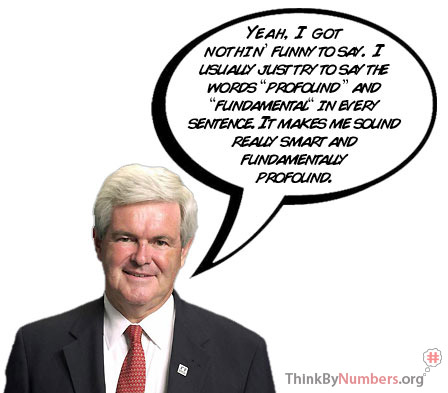 (a.k.a. Sorry, There’s Nothing Funny About Newt Gingrich)

Like Cain and Romney, all his cuts would come from the repeal of Obamacare.

Other than that, he’s not too specific.  From his website:

The Gingrich Record on Spending

Gingrich’s fiscal record is mixed. During his time in Congress, he had an exemplary voting record on a lot of the top spending proposals:

Gingrich has also been a vocal opponent of most of the big spending habits pushed by the White House and Congress over the past few years.  He opposed the $787 billion stimulus proposal,  the auto bailout,  and Cash for Clunkers.

On the other hand, in 2003, when he urged “every conservative member of Congress” to support the Medicare drug benefit bill.  He called it the “most important reorganization of our nation’s healthcare system since the original Medicare Bill of 1965.”  The drug benefit now costs taxpayers over $60 billion a year and has almost $16 trillion in unfunded liabilities.

He’s also attacked those who oppose omnibus spending bills.  These bills roll thousands of programs which may not pass on their own into massive one massive all or nothing bill that is more likely pass. In 1998, he derided a group of House conservatives by calling them the “the perfectionist caucus” for opposing a 4,000-page omnibus spending bill, adding that “those of us who have grown up and matured in this process understand after the last four years that we have to work together on big issues.” 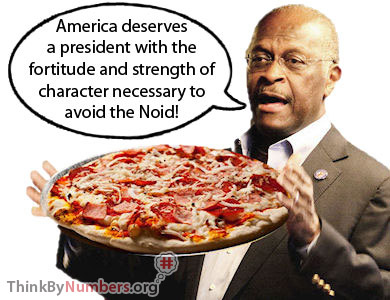 Like all the other candidates, Cain wants to repeal Obamacare which would save $20 billion a year.  But other than that, this is about as detailed as it gets:

“Nothing should be off the table. Every federal agency, every government program and expenditure must be reviewed and revised with a keen eye and a red pen.”

The Cain Record on Spending

It doesn’t exist.  With no political record, Cain needs to be way more specific for voters to make anything close to an educated decision.

What is known is that Cain supported TARP, the government bailout of the financial industry. He even chastised those who opposed it. 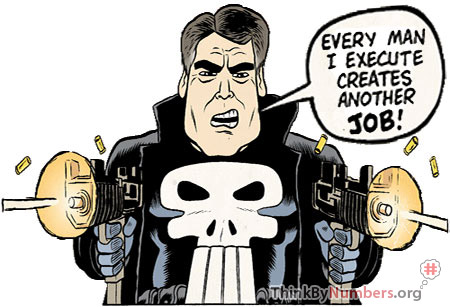 “Consolidating Department of Education funding for all elementary and secondary programs, reducing it by 50 percent, and returning the rest of the money to the states would save $25 billion in the first year. Reducing the portfolio of investments by government-sponsored enterprises like Fannie Mae and Freddie Mac would save $26.5 billion over ten years.”

The Perry Record on Spending

Like Romney, Perry’s real record is not one of fiscal restraint. Rick Perry came into office in December 2000. Texas general spending has risen from $29 billion that first Perry year to $41 billion by fiscal year 2011, which works out to an average annual increase of 3.5 percent. (Data from NASBO).

For some perspective, let’s look at Perry versus the average spending increases of governors in all 50 states over the last decade.

Under Perry, the Texas budget increased 41% from

However, the Texas population has grown faster than the U.S. population, so let’s put these figures on a per-capita basis.

Perry is touting the “Texas Miracle” as a template for the rest of America, which is stuck in a rut of high unemployment and could certainly use some fresh ideas for how to create jobs. Texas has clearly fared better than most other states since the recession began at the end of 2007. Its unemployment rate is 8.2%, a full point lower than the national average. The housing bust in Texas was far milder than it was in other places. A strong energy sector kept state tax revenues from plunging the way they did in other states, which forestalled layoffs in state and local government.  Additionally, the majority of the jobs created in Texas were government jobs.  From the beginning of 2008 to the end of 2010, government employment in Texas increased by 7 percent, whereas it only increased 2 percent over the rest of the country.  Private sector jobs in Texas only grew by 0.6% during this period.

So Perry’s record is perfectly mediocre. Like with Romney, we shouldn’t expect too much in the way of cuts if past is prologue.