Iran US Foreign Relations: A History of Violence

Many Americans consider Iran to be a psychopathically violent nation that would be willing to commit suicide in order to kill as many Americans as possible.  The statistics behind historical Iranian US relations do not support this view.

IRAN VERSUS THE US:  Will the real HARD CORE gangstas please stand up?

NUMBER OF IRANIAN CIVILIANS KILLED IN US ATTACKS ON IRAN = 290

Number of American TROOPS Killed in Iranian-Supported Attacks on the US = Between 0 and 4,715 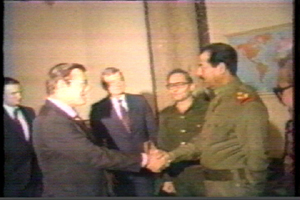 Number of Countries Bombed by Iran SINCE WWII = 0

Number of Countries BOMBED by the US SINCE WWII = 32