A world without disease, starvation, violence, and suffering is the ultimate destination of humanity. Getting there will require voters to base their decisions on statistical cost-benefit analyses instead of irrational emotions. The power of numbers can make utopia a reality.

Your mind has been infiltrated. Your logical and conscious prefrontal cortex is ever thwarted by powerful saboteurs hiding within the dark realm of your subconscious. The usurpers of your decision-making processes are none other than the ignorant reptilian brain stem and emotional limbic system. They torture you with sadness for the slightest defiance. They drug you with narcotic neurochemicals to reward your obedience. This diabolical duo is responsible for all forms of irrational human behavior, such as racism, war, and marriage. Your only defense against these illogical bastards is to base your decisions on cold, hard numbers. For unlike these very flawed and mischievous components of our brains, numbers cannot lie.

Three Brains are a Crowd

You have a total of three brains: the reptilian brain, the paleo-mammalian brain, and the rational brain. In a sense, a human being is what you might get nine months after a romantic evening between a lizard, a dog, and Mr. Spock.

That’s all that crocodiles really do with their tiny, pea-sized brains.  This republican, I mean reptilian brain is “rigid, obsessive, compulsive, ritualistic and paranoid”. It is prone to repetitive, programmed behaviors and is incapable of learning from mistakes.  The reptile brain’s only saving grace is that it is responsible for all core tasks required for self-preservation.

So within our craniums, we have an ongoing battle between the vicious, impulsive lizard, the slobbering dog digging a hole in your couch to china for no reason, and Mr. Spock struggling to determine the fate of our planet. Wouldn’t it be best to leave this job solely to Spock? 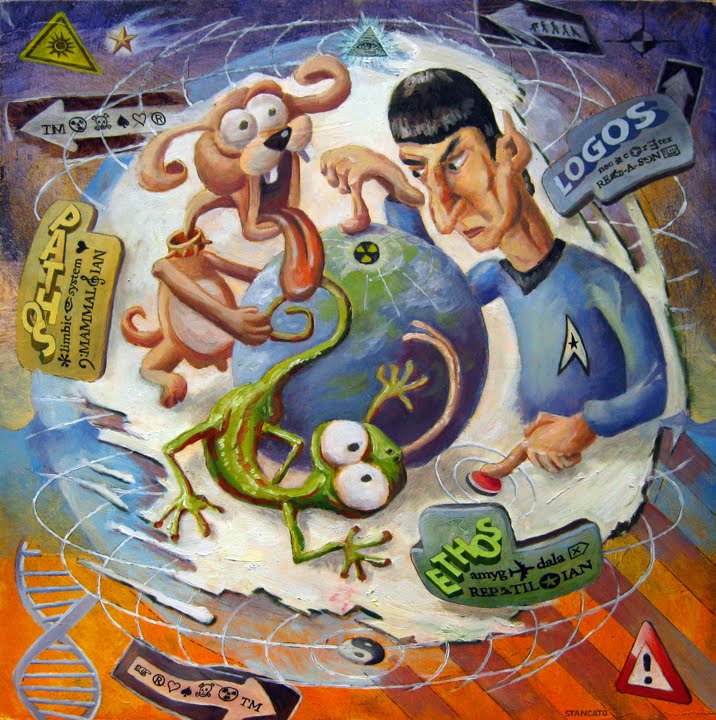 Why Our Brains Don’t Work Rite

So, we’ve got this top of the line neocortex which is perfectly capable of rational thought.  Why then, do we behave so irrationally as a species?  The problem is that the rational neocortex is enslaved by the lower brains.  It is not free to examine all available information in it’s quest to attain objective truth.  Instead, it frequently becomes a kind of a slimy neuro-lawyer defending and rationalizing the preconceived notions of our emotional limbic systems. Let’s break down the processing of new infomation:

The limbic system, this primitive brain that can neither read nor write, provides us with the feeling of what is real, true, and important using its own often irrational and illogical criteria. It therefore poses great danger to all of human civilization.

Why No One is Reading this Sentence

Many of the hostile commenters on my site have expressed their own theories as to why this is.  However, I feel that the reason for this can be explained by a concept known as “The Caveman Principle”.  This principle states that our brains have generally evolved very little since the time of the caveman.

The human brain has been around for about 200,000 years.  The Stone Age only ended about 6,000 years ago.  So, ninety-nine percent of our ancestors lived in environments characterized by starvation and a general scarcity of resources. Evolution crawls at a snail’s pace, so we still have these caveman brains optimized for an environment millennia away from our own. So our wants, dreams, personalities, and desires have not changed much in 200,000 years.

So, like, what were cavemen into?  Surviving long enough to successfully replicate one’s genes in an unstable environment requires brains with very specific interests.  Hence, the type of brain that survived to reproductive age typically paid a great deal of attention to these questions:

Note these topics of interest, which are suspiciously absent from this list:

An interest in these topics was pretty much worthless to primitive humans struggling to survive in ancient Africa.  This is especially true since math and written language didn’t even exist at the time.  Conventional evolutionary theory states that traits that offer no survival or reproductive advantage will not persist in a species. Hence, these subjects are as fascinating to us as Al Gore recounting a riveting experience of watching paint dry.

Evolution has made these subjects brutally boring to most of us. So that, my non-existent reader, is why you are not reading this sentence, and are instead viewing one of the many fine pornographic websites that the prestigious internet has to offer.

“It is a capital mistake to theorize before one has data, fool.”  – Mr. T

A general disinterest in economics and statistics wouldn’t be a big deal if we lived in a dictatorship.  However, in our political system, government action is to some degree a product of public opinion.  Thomas Jefferson once said, “An informed citizenry is the bulwark of a democracy.”  Based on this quote, I think it’s safe to say that our democracy is currently bulwark-free.  The fact that I don’t know what a bulwark is further proves that we do not have an informed citizenry.

The only way to understand the important details of complex and large-scale societal issues is through the use of statistics and economics. Additionally, formal cost-benefit analysis is the only way to make optimal decisions on these complicated issues.  Unfortunately, most of us don’t even know what a cost-benefit analysis is, let alone have a firm grasp of the statistical and economic data needed to perform such analyses.

Here’s a list of what the average voter (such as myself) doesn’t know:

Without factual data for our neocortices to utilize in doing a cost-benefit comparison of our electoral choices, our stupid brain stems and emotional limbic systems get to choose our candidates.

The US government is the most powerful man-made entity in the history of the world. Allowing an uninformed public control of this colossus is like giving a baby a nuclear bomb. My dream is that one day we might upgrade our democracy to the equivalent of a toddler with a nuclear bomb.

Keep In the Vote!

“If a nation expects to be ignorant and free, in a state of civilization, it expects what never was and never will be.” — Pee Wee Herman

Elections are won and lost not primarily on “the issues” but on the values and emotions of the electorate, including the “gut feelings” that summarize much of what voters think and feel about a candidate or party.

Ideally, the goal in selecting any candidate is to identify the individual most likely to maximize the overall well-being of the citizenry. If our neocortices were in charge, politicians would be selected solely based on three primary criteria.

Unfortunately, I and most other voters have an informational vacuum between our ears with regard to this data for most candidates. Hence, our neocortices are unable to perform a rational calculation. This leaves the decision up to our stupid brain stems and emotional limbic systems. These portions of our brains can’t follow arguments of any complexity. They stuff themselves with slogans and advertisements. They eschew fact for myth. They operate on biases and stereotypes. They privilege feeling over thinking. The result is a political system of daunting irrationality.

The primary factors which do influence our electoral decisions include:

We’re damn lucky that CEO’s aren’t elected by popular vote.  If the public got to decide who ran Microsoft, I would be typing this sentence on a typewriter.

How to Beat Out Your Brains

Utopia, a world without disease, starvation, violence, and suffering, is the ultimate goal and destination of society. The thinking, rational mind has the power to make utopia a reality through innovation.  We’ve had a few hundred thousand years to get there, yet it remains a distant dream. Irrational or uniformed decisions are the primary reason why humanity fails to reach its true potential.

In a democracy and a free enterprise economy, voters and consumers are the deciders. Our prehistoric brains decide to waste society’s resources on wars and short-term gratification through erroneous decision-making. They are a drain on the economy, public welfare, the environment, and national security. Resources are misallocated, good ideas are rejected, and bad ideas are accepted. Money is wasted. Life and health are put in jeopardy.

Irrational beliefs are sand in the gears of the entire economy.  It’s virtually certain that your life will be shorter and less happy as a result of emotion-based decisions.

The only way to break the shackles put on our neocortices by its evil stepsisters is through the use of numbers.  When our rational mind has cold, hard statistics to support its arguments, it’s much more likely to overcome the emotion-based arguments of the primitive brains.  Providing your neocortex with this ammunition is the purpose of this site.  Using numbers we can overthrow this idiocracy and ignite a revolution of reason.  Suffering can be eliminated and utopia can be realized.

It’s quite possible, and maybe probable, that I’m an idiot. I may be wrong about a lot of this stuff.  If so, I would be eternally grateful if you were to straighten me out in the comments section.