The financial sector receives more of the average paycheck than any other sector of the economy.  Its share of the economy totals $2 trillion dollars.

The purpose of the financial services industry is basically to transfer money from savers to entrepreneurs. It primarily consists of using a computer to shift money from one bank account to another. This service requires virtually no physical labor and very few material resources.

Yet, this relatively simple service cost our country more than $2 trillion in 2007. That was more than the country spent on health care, construction, food, utilities or transportation. 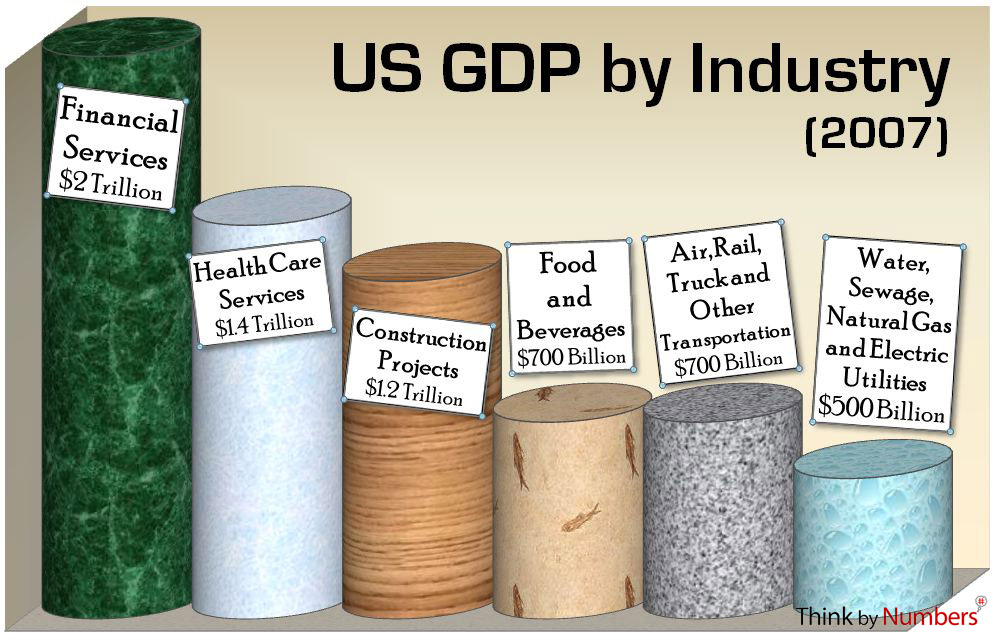 How can financial paper shuffling to cost us more than the construction of the skyscraper where the paper shuffling will then take place? How does this industry get us to spend such an inordinate amount of money on their services?

The free market system automatically optimizes resource allocation to satisfy society’s wants and needs. The current problems in our financial sector can be seen as our economy’s attempt to reduce the excessive size of the financial sector and redirect those resources to more productive purposes. Yet, the government is doing everything in its power to counteract this process. The feds have taken or committed to take over $12 trillion from the other sectors and given them to financial institution to maintain this imbalance. This works out to $42,105 for every man, woman and child in the U.S.

The financial sector is at a historic high as share of the overall economy.

Note another year in history when it peaked, 1929.  At that time, many of the country’s resources were shifted to this low-employee, unproductive sector.  It was followed by a decade of unemployment and economic stagnation.  This would suggest that it may be unwise for the government to fuel this bloating if they wish to avoid another lost decade.

This begs the question “Why is government taking money from the paychecks of working people and giving it to AIG and Goldman-Sachs?” They claim that their failure will result in the collapse of our entire economic system.  This would, of course, eventually lead to a dystopian Mad Max scenario. However, the presented choice between government bailout and complete financial collapse is a false dichotomy. In reality, if the government allowed these irresponsible actors to fail, they would enter a bankruptcy process and be sold off to more smaller, more responsible companies.

Correlation doesn’t necessarily imply causation. However, the reason the government is so set on using tax dollars to prop up these insolvent companies (as opposed to taking the bankruptcy route) might be related to campaign contributions. For instance, AIG executives gave more than $630,000 during the 2008 political cycle even as the company was falling apart. President Obama collected a total of $130,000 from AIG in 2008, while McCain accepted a total of $59,499. Last year AIG and its subsidiaries spent about $9.7 million on federal lobbying, or about $53,000 for every day Congress was in session in 2008. Additionally, Obama’s top presidential campaign contributor was Goldman-Sachs. McCain’s was Merril-Lynch.

For all the awful investments AIG made, this political investment has produced a 1730000% rate of return.