The average household in America had to shell out around $2000 to make sure that AIG’s counter-parties wouldn’t have to accept the risks they took.  Would the world really have ended if we let AIG declare Chapter 11 bankruptcy? 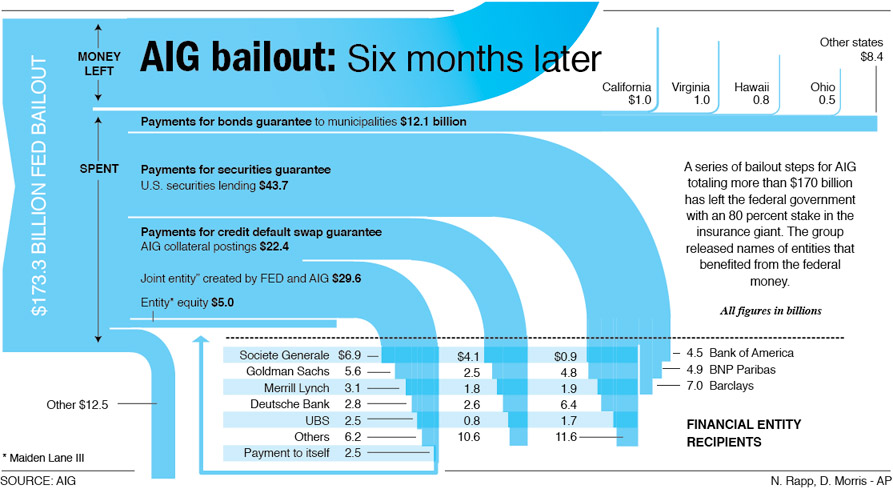 To answer this question, we have to understand why was AIGFP (American International Group’s Financial Products) division in financial trouble.  To understand this, we have to know what a credit default swap is.  The answer to that is illustrated here.

So what caused AIG to fail?

Allegations of accounting irregularities, caused AIG to be downgraded from a AAA to A credit rating. This downgrade triggered provisions in some of AIGFP’s credit default swaps which required AIG to provide billions of dollars in collateral to their counterparties. (Counterparties are companies like Goldman Sachs which bought credit default swaps from AIGFP to insure against mortgage defaults within their mortgage backed securities.)

Since AIG didn’t have the money to put up this collateral, the government loaned them $170 billion. This was called a loan but there is almost no chance that the loan will ever be repaid. This is because the AIGFP division has no intrinsic worth and the has no prospects for significant future income since the real estate bubble on which it thrived on has burst. As of 2011, $11.4 billion has been repaid.

AIG recently released a list of their counterparties who received the bailout money. Most of this American taxpayer money went to European banks.

Was the Bailout Really Necessary?

On April 2nd, Hank Greenberg, former CEO of AIG, testified before congress that the taxpayer would have been much better off if the government had allowed AIGFP to file Chapter 11 bankruptcy. (Video of Testimony)

Through this process, AIGFP would be broken up and sold off. The proceeds would go to their creditors. If this were to occur, the counterparties would have only received maybe 20% or 30% of the money that AIG owed them, but Greenberg said it definitely would not have led to systemic failure of the entire financial system. It makes sense. For instance, Goldman Sachs received $12.9 billion in counterparty payments. That’s far less than the $18 billion that they spent on executive bonuses in 2007. So the receipt of only $3 billion through an AIG bankruptcy settlement would not have broken them, but it would certainly have brought down executive compensation.

What Was the Real Motivation?

Numerous congressmen have requested the Treasury Department’s explicit explanation of how AIGFP division’s bankruptcy would destabilize our county’s entire financial system. Naturally, the Treasury has failed to provide a description of this scenario. This, in conjunction with the fact that Goldman Sachs was President Obama’s number 1 campaign contributor, should make anyone suspicious of our government’s motives. In fact, Goldman Sachs has spent over $43 million on political contributions. This is a paltry sum when compared to the tens of billions they made off of the AIG bailout.

How Much Did The Bailout Cost You?

The bottom line is that the average household in America had to shell out around $2000 to make sure that AIG’s counterparties (giant financial institutions) wouldn’t have to accept the risk which they made when they allowed a private entity, AIG, to insure on their behalf with a public statement that they were able to evaluate. Losses are socialized and profits are privatized. I can guarantee that each household would not have received $2000 from AIG had these investments turned out to be successful.