Add it up.  Romney’s Total Savings = $0.01 trillion less than Obama’s budget! With a national debt on the order of $16.2 trillion, you’ll barely even notice the difference!

Are you tired of all that money cluttering up your home?  Try NEW PRESIDENT™!

Governor Romney™ has been scientifically proven to increase spending faster than the President Obama™! Obama has only increased government spending a disappointing 5.5% annually over his term.

Under Governor Romney, Massachusetts state spending went from $22.3 billion to $28.1 billion,  an amazing 6.5% per year! That’s faster than most other leading governors (6.2%)! And if we’ve learned anything from the vast disparity between George W. Bush’s fiscal rhetoric and fiscal record, it’s that Romney’s gubernatorial record might be a better indicator of what we could expect from a Romney federal budget.

The same Wall Street recipients of TARP bailout money that were top Obama donors in 2008 are top Romney donors in 2012. Why? 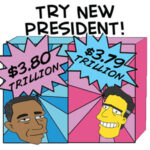